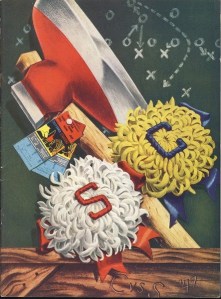 The overcast weather reminds me of living in Berkeley, chilly, but not cold. It’s shorts and sweatshirt weather! I love it! It couldn’t happen on a better day either, it is Big Game Friday! (Is he talking about sports?) Yes it is a football game, but on the UC Berkeley and stanfurd campuses, this is more than just a game. This game embodies the rivalry between the two prestigious institutions of higher learning. Every year the two teams compete for “The Axe”.

I can’t speak about the mood on “the farm”, but the Berkeley campus is buzzing during the week, as many of the Fall Athletic teams schedule their games with stanfurd during Big Game week and they have their own nicknames, Big Spike, Big Splash, Big (fill-in-the-blank). With so many of the teams they measure the success or failure of their season based on the results from these games.

Similarly, as academic institutions, the programs care about where they are ranked overall, but they especially care about where they are ranked with respect to one another. The competition drives each other to achieve more and become better than they were. The competition helps each side from falling into complacent behaviors. Thus in that way, rivalry helps make each other than we might have been.

There  are unhealthy aspects to rivalry as well. I admit I have been involved in a few situations where property damage occurred, and I have not always been the greatest witness to the transforming power of Christ during times when the Bears were facing off against the cardinal. In such instances, rivalry brings us down to our lowest level and we spew the ugliest parts of ourselves to bring the other down.

Hopefully, we can accentuate the best parts of rivalry, and minimize the effects of worst parts.

I am excited that I get to go up to Berkeley this weekend and watch the Big Game this year. I will root on the Mighty Golden Bears to pull off an upset. Go Bears!

I am often asked what describes you, which is a hard answer because sometimes I move in a thousand different directions. Some call me an engineer, others call me pastor, a few call me captain, some call me friend, others call me dad, and one calls me sweetheart. All of these things are descriptors and are accurate, but they don't fully capture me. My favorite place is in the mountains, enjoying the beauty of nature and God's creation, running and hiking around with my family and friends, and taking photos to cement the memories. However, the people that know me the best know that my favorite thing to do is come up with crazy adventures that push the limits of what our minds and bodies can do. My faith in God is important to me and drives me to look at creation the way I do. Because of my faith, I look at these adventures and running races from Half Marathons all the way to 50-mile races, as well as several Obstacle Course Races, as an opportunity to push the body God gave me as an act of worship. Hopefully, someday soon, I look toward running longer races and bigger adventures. My hope is that humanity can understand that the wild is a gift, and we need to care for it and quit destroying it by the way we live. View all posts by JRMITCH85