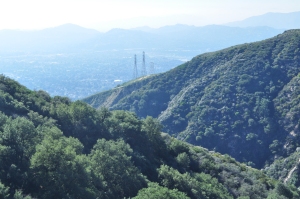 The other day we took a small hike in the San Gabriel Mountains and climbed up Echo Mountain. The intent was just to go for a hike and we had no specific goal in mind as the hike began. This was an easy 5 mile round-trip hike, and because we had plans later in the day, we thought this would be the perfect distance to travel. It was an opportunity to get away from the conveniences of television and computers (although I still had my phone and camera) and go spend some time in nature and look at the beauty that is not far away. 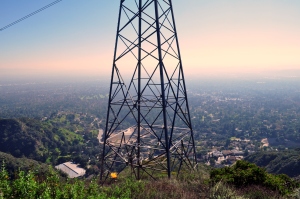 I lived in Pasadena when I first moved down to Southern California, and I always thought about hiking up in the San Gabriel Mountains, especially since the trail head was just at the top of the closest major street, but it took me moving an hour away to actually make my first hike in this area.

Unfortunately, as many days in Southern California, the smoggy haze covered the Southland and we didn’t get to see the urban sprawl of the LA Basin with much clarity. I was looking forward to seeing that, and I heard from several people on the trail verbalize what I was thinking, “We should come up here after a good rain, and then this view would be amazing.”

However, I was astonished when we got to the end of the trail, because here are remnants of a dose of man’s intrusion into nature, as we saw what remained of a resort. Here in my attempt to get away from the city and into nature, I found the city. In my reading since going up there this was described as the Disneyland of its day. However, in 2011, all that remains is some concrete, metal gears, pulleys, and motor parts. I couldn’t say that I was terribly surprised that something like this was up there, because one needs only to look to the top of the mountains to see a great deal of metal towers and buildings. Also as we walked up the hill you pass under power lines and directly under a tower.

Although it still surprises me that we as people carve out spaces in the mountains and we live like we would in our cities. Our “retreats” into the wilderness, while spending time in the beauty of God’s creation, become less leaving the city, and more creating a city in the wilderness. I am comforted that this is not something new, but something that we have been dealing with for more than 100 years. But as I look at these “relics” of a bygone age, I think there is a beauty in nature reclaiming them. Sure if they weren’t protected I’m sure someone would meaninglessly take these parts, but nature has claimed them, and made them beautiful once again.

However, we as people don’t return the favor to nature, we take our cities and make the air “dirty”, so much so that as I looked forward to seeing the San Gabriel Valley from a new vantage point, I was disappointed because all I got was a hazy image.

God has made us stewards of this planet, and I need to do a better job at carrying out this mission.

I am often asked what describes you, which is a hard answer because sometimes I move in a thousand different directions. Some call me an engineer, others call me pastor, a few call me captain, some call me friend, others call me dad, and one calls me sweetheart. All of these things are descriptors and are accurate, but they don't fully capture me. My favorite place is in the mountains, enjoying the beauty of nature and God's creation, running and hiking around with my family and friends, and taking photos to cement the memories. However, the people that know me the best know that my favorite thing to do is come up with crazy adventures that push the limits of what our minds and bodies can do. My faith in God is important to me and drives me to look at creation the way I do. Because of my faith, I look at these adventures and running races from Half Marathons all the way to 50-mile races, as well as several Obstacle Course Races, as an opportunity to push the body God gave me as an act of worship. Hopefully, someday soon, I look toward running longer races and bigger adventures. My hope is that humanity can understand that the wild is a gift, and we need to care for it and quit destroying it by the way we live. View all posts by JRMITCH85